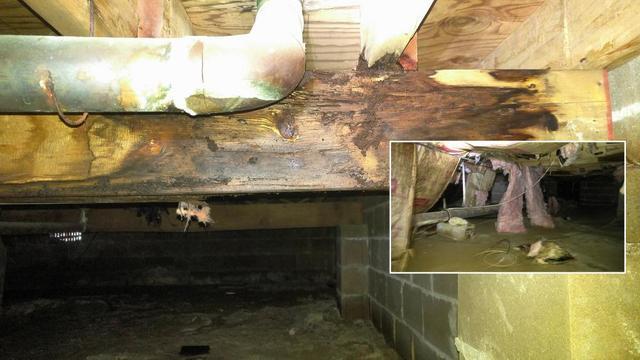 The adverse effects on one’s health caused by mold growth inside homes and other structures is a serious problem. Unfortunately, here in New Jersey, mold is an all-too-common problem because of our high humidity levels and water intrusion events like flooding. According to the World Health Organization (WHO), occupants of damp or moldy buildings face an increased risk of respiratory symptoms and infections, especially those with asthma and other pre-existing respiratory conditions.

Because microscopic mold spores circulate on air currents throughout a home, mold does not need to be growing in the living areas of the home to make its occupants sick. More often than not, mold grows unnoticed in the non-living spaces of the home. The most likely area to find mold is out-of-sight, out-on-mind crawl spaces where humidity levels, especially during the summer, can skyrocket.

Many homeowners that have crawl space foundations have found them to be the source of many headaches. The problem with them lies with their traditional construction. Despite the empirical evidence and recommendations of building scientists in favor of encapsulated crawl spaces, old habits die hard, and builders continue to build homes with traditional vented crawl spaces.  This “old way” of construction is based on the erroneous belief that crawl space venting helps alleviate the moisture problems in houses. However, this is simply not the case. Building science studies have determined that traditional crawl space venting actually facilitates drawing in hot, humid outdoor air which then circulates throughout the home. Not only is this humid sticky air uncomfortable for the home’s occupants, but it also creates a dark and damp environment that supports mold growth, posing a serious health issue.

When it comes to mold growth, vented crawl spaces are an accident waiting to happen. In all candor, homeowners should consider themselves lucky to not find themselves with mold growing down below. Vented crawl spaces have just what mold is looking for: available organic matter to eat (such as virtually any wooden building material), high indoor humidity, and the right temperatures for mold to grow and thrive. In traditionally vented crawl spaces, the conditions necessary for mold growth are often met.

We are often asked why are vented crawl spaces still being used. It’s all about history. In the past, there was a misconception shared among builders and homeowners that the best way to reduce crawl space moisture levels was to vent the moist air to the outside. This theory of cross-ventilation was even supported by building codes that dictated that builders place vents on opposite sides of the home. The idea behind this was that the cross-breeze would expel the damp air out of the crawl space and substitute it with less moist air from the outside. Although on its face, this cross-ventilation theory sounds good, it is fraught with design flaws and fails to recognize actual air movement patterns.

First, and most important, air moves upward in a house like a chimney, not across. Building scientists call this upward air movement the stack effect. When there is moisture build-up in a damp crawl space, as is often the case, this mold-infested air, is drawn upward into the living area of the house, and not outward through the vents as was assumed. In fact, it is estimated that up to 40% of the air circulating on a home’s first floor comes directly out of the crawl space. Some of the musty crawl space air will leave the home through windows or other areas, but the bulk of it will continue to rise upward through the entire home until it is expelled through the attic.  The airborne mold spores and dust mites circulating in the air from damp crawl spaces are among the most common indoor air pollutants and allergens.

A major problem with vented crawl spaces is that, during the summer, humid air is drawn into the crawl space where it deposits moisture in the form of condensation. These small droplets of water attach themselves to insulation, piping and other materials, and are unable to be vented out. In addition to incoming moist air, mold spores prevalent in the outdoor air travel through the vents into the crawl space as well, attaching to these wet materials. Once the ingredients necessary for mold growth are there, the inevitable happens and homeowners find themselves with a mold problem.

Mold growth is not just a summer problem. During the winter, there is a very different problem caused by vented crawl spaces. During the winter, cold air travels into the crawl space through the vents – air that is cold enough to freeze pipes! Needless to say, should any pipes crack or burst, there will be a significant moisture problem followed by mold growth.

The only preventative long-term way to eliminating moisture from a crawl space is by encapsulating that space and installing a commercial-grade dehumidifier. Encapsulation is a relatively new process that completely and permanently separates the crawl space from the outdoor elements.

With encapsulation and dehumidification, humidity and moisture levels are kept at levels where mold cannot grow. Encapsulation actually stops the moisture from ever getting into the crawl space area from the earth below. The beauty of encapsulation is that excess moisture does not need to be removed from the crawl space (as is unsuccessfully attempted by venting) because it never enters the crawl space in the first place. Without excess moisture, mold cannot grow. It’s as simple as that. Homeowners are able to avoid a serious health issue and provide improved indoor air quality for their families.

You can learn more about crawl space science and encapsulation by clicking here.